Lira Galore is accusing Quality Control Music CEO’s Pierre ‘P’ Thomas of abusing her while she was pregnant with their daughter.

According to legal documents obtained by TMZ, Galore describes five separate incidents of abuse at the hands of Thomas including one incident where she was punched in the face, thrown to the ground, choked and punched in the heat so often she developed knots. She also claims that Thomas ripped her engagement ring off of her finger, dislocating her ring finger.

In the lawsuit, Galore is seeking $15 million in damages over the alleged abuse.

In December 2018, Galore posted to Instagram regarding their relationship, writing that she was “tired of being bullied and disrespected” and that she “never asked for none of the money, cars, rings, bags” or gifts given to her from Thomas. In August of that year, Galore claims Thomas attempted to “make things right” between then by buying her a $50,000 SUV, only to break the driver-side window of said SUV during a violent altercation. A week later according to Galore, Thomas paid her $50,000 not to call the police and report the abuse. 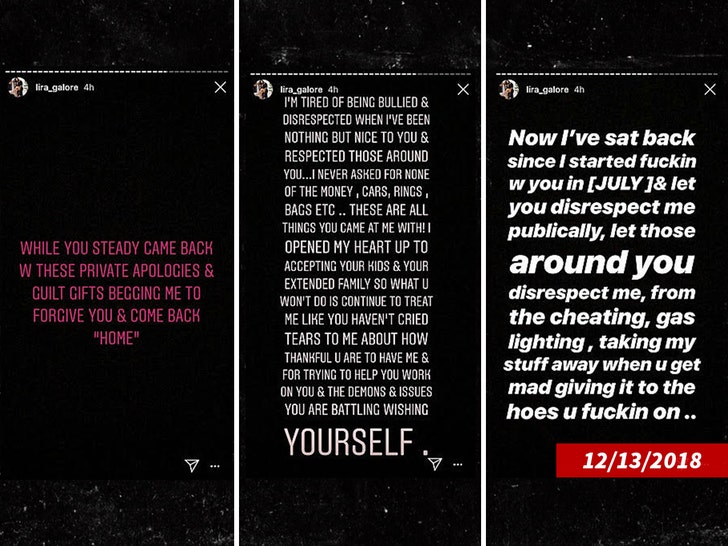 Galore is requesting sole physical custody of their child after Pee filed for joint custody earlier this year. The court documents added that Pee has “consistently demonstrated physically violent, emotionally abusive, irrational, and erratic behavior.” She’s also asked for a court order to keep him away from her and for him to submit to psychological evaluation.

RELATED: Watch: Lira Galore Is Coming For The People Who Leaked Her Sex Tape